Achkland officially the United Republic of Achkland or in the native Yashiman Meichō Kyōwakoku is a democratic nation situated on the continent of Valeya. The tropical nation's mainland is bordered to the east by The Confederated State of The Yorcke Republics and the Sea of New Avalon, it's archipelago of islands known as the Pojin Chain is situated in the Varunan Ocean.

Formerly a colony of the Greater Empire of Yamatai, Achkland gained independence after Shōgun no Revolt in 1925 when commanders of the Yamatai Colonial Army overthrew Yamatai officials in the nation as Yamatain forces were strained during the nearby War of the First Coalition of the Midlands. With much of the weapons and resources given by their colonial overlords, the independent Achkland commanders waged a year long war until Yamatain forces conceded in 1926. At this time they formed the Armed Republic of Achkland, a transitional state between its previous colonial status and democracy. That transition however did not materialize until 1978 when civilian demonstrations in much of the country forced the hands of military commanders to concede authority of the government back to the civilian populace. Thus the United Republic of Achkland was formed under the political principles known as Haikade.

Achkland was known to have been settled by native Valeyan groups as early as 2,000 years BC. These natives mostly settled along rivers and fished and hunted for a living. When Ordan and Escaran explores found Valeya and encountered such groups in what is today Achkland, they began trading with the natives and established a permanent presence. The name Achkland originated from the name of the first Vandish trade settlement known as Achkla where the practice of Escar Brides was widely observed thus spawning the mixed race of Yashiman and Vandish peoples known as Achklanders.

Today the United Republic is a progressive democratic nation known for its Meritocracy ideals and bustling manufacturing economy. Achklandish cars, machinery, computers, and weapons are used throughout the world and within the Valeyan nation. On an international scale the United Republic is a strong contributor to stability and organizations such as HECO that support such initiatives. While its Haikade system has many pacifist ideals, there is also a strong militarism still present in the nation that is seen in its invested armed forces and arms production sector.

Achkland is derived from an early Vandish trade settlement in the Pojin Chain from as far back as the 18th century named Achkla. This settlement brought some of the first Ordan and Escar colonists to the region who partook in exchange of resources with the natives for goods from their respective homelands. Amongst the Vandish and Escar peoples in this settlement, a "bride sale" called Escar Brides was widely practice in which young affluent Ordans often purchased brides from among the Escaran settlers. This practice gave birth to a mixed demographic of people known as Achklanders, or "wayward birds" in Yashiman.

A former colony of Yamatai, Achkland gained independence in the early 20th century during the later stages of the First Varunan War when military commanders of the colonial army overthrew the thinly stretched Yamatai forces remaining in the colony in an attempt to capitalize on the nationalistic fervor boiling in the population. These commanders during the onset of their conflict for independence were able to strike huge blows against their parent nation, but were subsequently pushed back by follow on forces. After several years of struggle in the midst of the larger conflict at hand in the region, the military forces of Achkland took the capital of Deltai and declared an independent government, thus forming the Armed Republic of Achkland in 1926.

The Armed Republic was promised to be short lived and democratic processes put in place to allow the people to choose their form of government. But after 30 years the generals still ruled over the fledgling nation, and caused many divisions within the ethnically diverse nation. Most notably was its mistreatment of the native Valeyan people in the south who according to international observers suffered many human rights violations at the hands of the military junta. 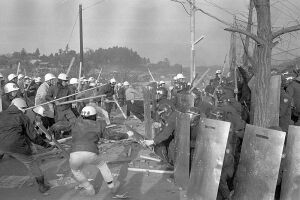 Riots in the capital of Deltai in 1976

Due to the influence of more modern democratic nations int the region and the increasing liberal values of secular urban areas, many demonstrations against the military government broke out. In 1978 much of the nation was placed under curfew as demonstrations and riots calling for democratic elections put the nation at a stand still, as the streets flooded with young and old Achklanders seeking democratic reforms. Around this time, General Kai Huang became increasingly influenced by a former professor and scholar, Benao Tanaka, who taught the General of his political theory of "Haikade" or "High position" a democratic ideology steeped in harmonious living of all people outside cultural or religious bounds. He became enamored with the idea of breaking down society to its most basic elements to better govern the people, rather than across cultural lines. Finally, in 1979 as demonstrations continued and the influence of Haikade spread through government circles, the military junta ended. The nation was reformed into the United Republic of Achkland.

Situated much near the equator, Achkland is a lush tropical nation with sprawling rain forests throughout much of the nation. The warm waters of the Sea of New Avalon flow through Achkland via the Kazuma and Murata river basins which give much of the vast rain forests of the central flatlands their source of moisture. Much of the nation is flat, with little being over 100 feet above sea level. In the north there is the small Ikemoto Range which crosses over from the border with Anglia and runs south along the coast till it meets with the Kazuma R. The Pojin Chain in the north Vurnan Ocean is a mountainous archipelago with some volcanic activity on its main islands.

The majority of the nation is warm year round, with the primary seasons being the dry and wet seasons of the rain forest. Much of the coastal areas are subject to tropical moisture that builds up over the Sea of New Avalon and the inner rain forest areas often have year round moisture. In the north Pojin Chain some drops in temperature are normal in the winter months and at higher elevations. 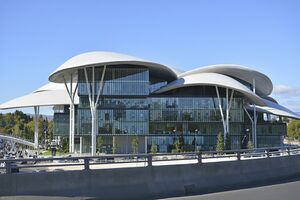 The Haikade, a counsel of 8 Elders (Mother, Soldier, Merchant, Laborer, Scholar, Artist, Doctor/Scientist, and Youth) who are elected for 6 year terms by those of their demographic. The Haikade is the most respected body of the Achklander government, coming from the traditional teachings of Benao Tanaka, a political activist of the middle 20th century who taught the theory of the "High Position" or "Haikade" a body of people who have the most to contribute to society or the most dependent on it. This led to the use of such a counsel that crosses cultural barriers to be the utmost authority and representation of the best interests of the nation. Members of this counsel shall not be a previous politician, but rather respected members of society. When elections for positions on the Haikade are taken, those who fit the demographic of the position in question report to polling places with applicable identification of such a demographic (e.g. proof of motherhood, doctor's license, enlistment or commission in the military past or present, etc). While the Mother is the only position on the Haikade that is gender based, the Haikade itself can be slanted towards a certain mindset should the demographics wish it to be that way. For insistence, the Soldier could also be a registered doctor, the Youth also a full-time artist, and the Mother also a studied Scientist. This interchangeability allows for the people of Achkland to elect representatives that best fit the needs of the nation at the time of the election. The Republican Diet (Top) and Chamber of Peers (Bottom)

The legislature of Achkland is a bicameral body consisting of the upper house of the Republican Diet of Achkland, and the lower house of the Chamber of Peers. The Republican Diet of Achkland is an elected legislature of 374 Representatives (based on constituencies) that serve 4 year terms on the Diet. The Diet holds the power of legislation, which they present to the Chamber of Peers to be created and brought to a vote on the Diet floor, as well as budget and power of purse. The Diet also elects the Head of Government, the Stateminister who is subsequently ratified by the Haikade. Frequently the Diet holds investigative powers over the other branches of government, with the ability to summon various governmental figures to tribunals or questioning on various matters.

Achkland is a progressive democratic nation that is attempting to hold together several different cultures (both colonizers, those of mixed backgrounds, and natives) together. Achkland itself is a very secular nation with religion holding little to no sway on politics, though many within the nation are religious themselves. Parties within the Republican Diet cross many different political ideologies and represent a wide swath of beliefs throughout the diverse nation. 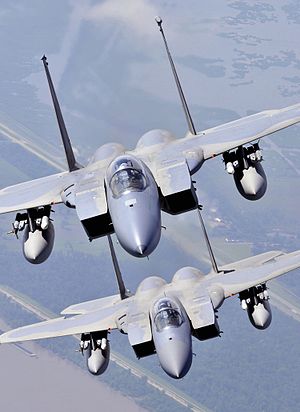 Achkland itself is peaceful, being neutral in conflicts between other nations to the extent that its export goods see a broader market free of polarizing alliances. Trade is a large part of the economy as its export goods such as technology, automotive, manufactured goods, and armaments are much sought after around the world. For this reason, Achkland seeks good relations with most nations to foster international partnerships and increase their market scope. Achkland is committed to working with international organizations to maintain stability in the region and abroad.

The military of the United Republic of Achkland makes up less that 1% of the population of the democratic nation. The armed forces are volunteer only, with provisions for draft in place such that males 18 and older are required to register, however no such draft has ever taken place since the formation of the republic. The military itself is given ample funding (approx 2% of GDP) as its missions include defense of trade lanes, territorial defense against regional threats, international stability operations (with cooperation with partner nations), anti-terrorism, and various other civil applications. The Armed Forces are broken into 4 branches: Army, Navy, Air Force, Marines, of which the Navy and Air Force are given the bulk of the investments to give Achkland the capability to both protect its interests abroad (contributing to international missions), and defend those interests at home (stability of sections of the nation deemed at risk, defense of territorial waters, etc).

The Achklandish economy is based around five major industries that contribute to its international exports: Electronic Goods, Fruits, Vehicles, Medical Technology, and arms. These industries have made it a dominant force on the world market, making it a chief exporter to regions such as Escar and Orda. Within the nation, service based industries are also seeing widespread success among urban areas where large groups of population of congregated during the early portions of the 21st century. Achkland has a market economy in which many businesses enjoy low corporate taxes and only moderate regulation. International investments from nations in Escar and Orda have also increased in the past decade, bringing thousands of jobs to Achklandish citizens.

Retrieved from "https://ordis.miraheze.org/w/index.php?title=Achkland&oldid=9647"
Categories:
Cookies help us deliver our services. By using our services, you agree to our use of cookies.