The Glorian Cult (High Arcadic: Gloria Cultum) also known as Glorianism, the Jovian Cult (Iovis Cultum), and often simply as The Glory, is the state religion of the Dominate. Glorian theology is centered on the veneration of the mythical First Dominus and prophet, Iovis, who was said to have ascended to a cosmic divinity known as The Glory, or Immaculacy, and returned to the world as a living God to deliver his people from sin. Descendants of Iovis, including the modern Dominii of the Iovem dynasty, are also seen as fundamentally divine, though typically they are believed to complete their full ascension only in death.

Glorian worship is heavily centered on family and community, and worship is primarily conducted at large, public temples, though private family or neighborhood ceremonies are often held at smaller shrines on festival days. The Cult is heavily orthopraxic, and great emphasis is placed on correct observance of rituals and clerical law, the adherence of institutions being enforced through the Holy Tribunal for Inquest, which maintains branches in each of the various Imperial realms. Specifics of dogma are less centralized, and teachings differ between the various Holy Orders responsible for the administration of local clergy, with Grandmasters assembling in regular concilia to debate theological matters. The final authority on all clerical decisions however is the reigning Dominus.

The history of the Cult is typically divided into two distinct eras, separated by the First and Second Exalted Marches. Early Glorianism began as more direct veneration of the Arcadic dominii, and their worldly authority; it later absorbed elements of Khorneran folk religion, and with them, much of the robust clerical structure of the temple network. Under Severus II, the faith was legally enshrined as a national creed, partly in response to the growing prevalence of Christianity on the imperial frontier. This centralization of the cult would reach its height with the Exalted Marches against the Terminus Rebellions.

'The Glory' or 'Immaculacy' is regarded as the primal divine spark of the universe. By its nature it is unknowable to mortals, and it is described as 'magnificent beyond comprehension'. The Glory is what maintains the universe and imposes structure on reality. It is not an entity, but rather, a kind of divine force that exists in a higher reality and from which the known universe emanates. Though the Cult emphasises worship of the various Dominii, The Glory holds a revered position in Glorian theology. It is regarded with awe as a mystical force with whom communion is the ultimate goal.

According to scripture, the first Dominus Iovis ascended to divinity when he managed to enter the realm of the Glory. From that point onward his bloodline was anointed as sacred. After death, all human souls with the exception of Anathema, ascend to The Glory. However, only the souls of the virtuous faithful are regarded as being capable of enjoying communion with The Glory. The souls of the faithless are instead destroyed upon reaching The Glory, unable to comprehend and receive its sheer majesty.

Virtue in Glorianism is fundamentally defined by loyalty to the family, to wider society and to the state. Vigilance in one's duties is believed to ensure a harmonious life on earth, and protect the soul when it becomes one with The Glory. Actions are judged in how they enable or disrupt social harmony, and while sexual expression or the accumulation of wealth may not be seen as inherently sinful, they may be perceived as such if their pursuit conflicts with a harmonious social order.

Jove, (High Arcadic: Iovis) is venerated as the first Dominus and as prophet of the Glorian Cult. According to the Books of Auridon, he was born in the year 769 BCE.

Upon climbing Mount Feryx, he ascended to the realm of The Glory, where the truths of the universe were revealed to him and where he was chosen to rule over Ordis. Iovis returned, having attained divinity, and began to preach his new doctrine.

He founded the Dominate, with himself as Dominus.

Auctoritas is a High Arcadic word, from which to Low Arcadic autorita is derived, historically referring to the level of prestige a person had in Arcadic society, and in a numinous sense, the mysterious 'power of command' of heroic Arcadian figures.

In Glorianist theology, auctoritas is seen as a gift of the Glory, with the Dominus as the auctoritas princeps the purest manifestation of this divine power and the moral authority of the realm. Figures other than the Dominii however are also perceived to exercise auctoritas, and alongside the primary pantheon of past Dominii, many Glorian orders also have sub-cults centered on great generals and thinkers, as well as the family of past Dominii. Such figures will often have alcoves in the temples of the Dominii with whom they are associated, and may have regional festivals held in their honour.

Malediction (maledicti, 'that which is accursed/evil') is a concept in Glorian religious law, referring to that which is perceived as anathema, heretical, inherently sinful or highly disruptive to the social order. Examples include adultery, murder of a parent or spouse, and violent rebellion. These are actions considered to be especially heinous and counter to piety. The endorsement, or in some cases, even the depiction of such acts, may also be considered a malediction.

While an element of religious morality, maledictions are often legally punishable even under secular law in the Dominate, though which acts are treated as such varies between states. In Redon and Khornera, adultery is punishable by fines if a case is taken to court. This is not the case in Zeeduyn.

Maledictions also have a historical role in the persecution of heretics and religious minorities in the Dominate, as well as wars against foreign powers. The Holy Tribunal of Inquest, or the Dominus himself, may declare certain teachings maledicti. Non-belief is considered a malediction, and in the past followers of {{wp|Christianity|Mashiachism]] were subjected to legal harassment as a result of their maledicti status. Since the mid-20th century however, Imperial edicts have declared that the followers of maledicious faiths or creeds are not in of themselves maledicti, though religious freedom in much of the Dominate remains restricted and unequal.

During the Endwar in Orda, Dominus Theodosius IV declared the Volzi and Eutanasioist regimes as maledicti, and branded resistance against the Zusean and Hyspanic invasions of the country as Exalted Marches, drawing a line of continuity with classical and medieval holy wars against neighboring Mashiachist states and rebel provinces.

The Cult does not have a singular holy book or authoritative source of scripture, though the Books of Auridon, a series of tracts by a number of different authors compiled around the 5th century CE which tell the history of the mythical first Dominus Iovis I, are often seen as the doctrinal core of the faith.

Beyond this, there are a great number of other commentaries, anecdotes of the lives of Dominii, books of prophecies, Imperial religious edicts and liturgical publications by both high clergy and Holy Orders which are used as sources of religious instruction, but which receive varying levels of recognition by the ecclesiastical establishment. Some, such as the Mysteries of the Oracle of Senon, are seen as equally canonical to the Auridon, while many others are effectively limited to glorian folklore and tolerated so long as they do not contradict established teachings.

'Folk Glorianism' describes the collective set of folk beliefs that exist outside the officially recognized canon of the Cult's hierarchy. This folklore is highly regional, with great variation in beliefs between the various realms of the Dominate. Influences include traditional mythology, foreign religions such as Mashiachism and modern urban legends.

A notable form of Folk Glorianism is the tradition of 'Jovian stories'; short tales or anecdotes passed down orally, providing simple moral lessons from the life of Iovis, or other Dominii. Many such stories have since become classic proverbs and idioms, and have become de-facto elements of formal teaching through linguistic influence. 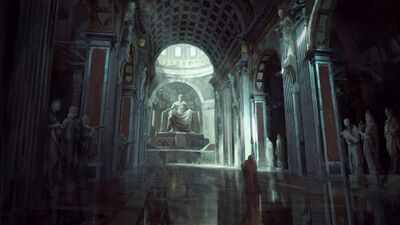 Grand Hall of the Great Temple of Dominus Iovis Primus, Arcadis. The Great Temple serves as the headquarters of the Glorian high clergy, the Imperial Oracle, and the Holy Tribunal. In addition, it is a popular destination for pilgrimage.

Retrieved from "https://ordis.miraheze.org/w/index.php?title=Glorian_Cult&oldid=11253"
Category:
Cookies help us deliver our services. By using our services, you agree to our use of cookies.