Yamamoto Hanako (山本 花子 Yamamoto Hanako; born 19 January 1961) is a Yamataian politician serving as the current Prime Minister of Yamatai and leader of the Yamatai Restoration Party (YRP) since 2015. Yamamoto previously served as the Chief Cabinet Secretary from 2011 to 2015 and as Minister of Culture and Communications from 2008 to 2012 under the previous Prime Minister, Ishihara Junichiro.

Yamamoto comes from a prominent political family. She was elected to the Teikoku Gikai in the 1994 election, representing the 6th District of Kinai Province. She was appointed the Minister of Culture and Communications by Prime Minister Ishihara Junichiro after he became Prime Minister in 2007. In the cabinet reshuffle following the 2011 election, Yamamoto was appointed the Chief Cabinet Secretary, a politically powerful position. Yamamoto staged a surprising victory in the 2015 contest for YRP presidency, defeating Ishihara and the Minister of Defence Usui Hideo. With the YRP achieving a landslide victory in that year's elections, Yamamoto became the Prime Minister of Yamatai.

Yamamoto is a conservative who has been described by various political commentators as a right-wing nationalist. She is considered a hard-liner with respect to Nakgaang, and advocates increased military spending and HECO cooperation to contain and oppose Nakgaang. Yamamoto is known internationally for her government's economic policies, which pursue monetary easing, fiscal stimulus, and structural reforms to make it less difficult for foreign corporations to enter Yamataian markets. She is also known for the vastly increased defence spending and military development during her terms.

Yamamoto Hanako was born in Heian to the politically prominent Okudera family. Her great-grandfather Okudera Yasaburo was an admiral in the Yamatai Imperial Navy and served as the Minister of the Navy on the Yamataian Imperial High Council. Her paternal grandfather, Okudera Gunzo, was one of the founders of the Yamatai Restoration Party and was the first popularly elected Prime Minister of Yamatai after Okabe Nariakira was assassinated in 1962. Yamamoto's father, Okudera Yoshiaki, also served as the Minister of Education from 1986 to 1990 and the Gikai representative of Kinai 3rd District from 1974 until his retirement in 1998. Her mother Mariko Takaoka is also a scion of the Takaoka family, which owns Takaoka Corporation.

Yamamoto attended Naoetsu Basic School in Morishita, and studied at Kanatomo Institution for her secondary and junior college years. She studied public administration in the National University of Yamatai and graduated with a bachelor's degree with honours in political science in 1983. After two years of working for the Kinai Provincial Government under her father, she pursued a master's degree in public policy at the National University of Yamatai.

Yamamoto was elected to the sixth district of Kinai Province in 1994, winning the most votes of the four representatives elected. She successfully defended the constituency in the 1998 elections despite strong anti-YRP sentiment nationwide following the mishandling of the economy and the 1997 Hasukuni earthquake by the resigned Kawamura Hideki cabinet. In 1999, she was made the Director of the Social Affairs Division. During the period of DPY rule, Yamamoto continued to make numerous political alliances in the background, and was not well-known by the general public.

After the DPJ government resigned in the wake of the Mizuno Land Scandal and the YRP's victory in the subsequent elections, Yamamoto was appointed Vice Minister of Public Safety by Prime Minister Morito Tatsuya. Yamamoto became a member of Ishihara Junichiro's faction of right-leaning conservatives, and supported his bid for YRP presidency in 2007. Ishihara subsequently became the Prime Minister following the YRP's landslide victory in the 2007 general elections, and he appointed Yamamoto as the Minister of Culture and Communications.

In 2009, Yamamoto was accused by a media watchdog group of unfairly restricting Ministry of Culture grants based on the recipients' political affiliations. However, the group later withdrew its accusations due to a lack of evidence to support their points. Yamamoto was a vocal supporter of Yamatai's involvement in the 2010 Masukan War as part of HECO.

After the 2011 general elections resulted in a lower-than-expected vote count for the YRP, Yamamoto's faith in Ishihara began to waver, and she began to form her own faction within the YRP. Nonetheless, Ishihara appointed her to Chief Cabinet Secretary in the subsequent cabinet reshuffle, a politically powerful position that increased her public profile as she began to appear frequently in the media as a spokesperson for the Yamataian Cabinet. Yamamoto used her clout as the Cabinet Secretary to enable her longtime ally Kaise Ikuo to become Vice Minister of Foreign Affairs.

Yamamoto was a surprise contender for the 2014 presidency, with few analysts expecting her to go far in a fight many saw as primarily between Ishihara Junichiro and Usui Hideo. Usui was a much older and more experienced politician with a humble background that made him famous throughout Yamatai and was widely expected to easily gain the presidency. Though analysts recognised that Ishihara was falling out of favour with the YRP senior leadership due to his poor economic policies and far-right ideology beginning to alienate voters, he was thought to maintain a strong following within the YRP's old guard. However, Yamamoto subverted all expectations by drawing on a vast network of supporters and allies she had made over her career, clinching a close victory against Usui and leaving Ishihara in the dust. 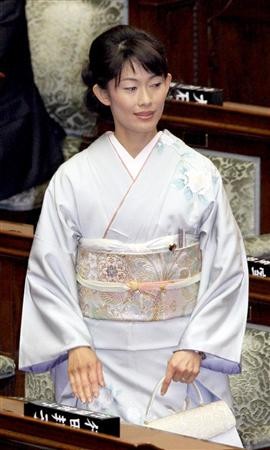 Despite the recession Ishihara had placed the country in, the YRP's managed an extremely close victory in the 2014 general elections. This enabled Yamamoto to be formally elected as prime minister by the Gikai on 7 October 2015. She and her cabinet were sworn in later that day, which analysts noted was staffed by both experienced YRP heavyweights such as Tsukada Kimito as Minister of Justice, as well as close Yamamoto allies such as Kaise Ikuo as Foreign Affairs. Early in her first term, international analysts suggested that Yamamoto was too inexperienced for the role, and that her cabinet lacked synergy.

In January 2015, Yamamoto gave an address to the Ordic League in which she explained her economic and diplomatic objectives. In response to the ongoing Yamataian recession, Yamamoto aimed to carry out monetary expansion aimed at achieving a 2% inflation target, enact a flexible fiscal policy to act as an economic stimulus in the short term, and a growth strategy focusing on structural reform and private sector investment to achieve long-term growth.

Yamamoto also began reversing harmful policies enacted during the Ishihara administration, starting by reversing immigration controls. The Yamamoto cabinet began taking steps to ease immigration and making it easier for foreign workers to find jobs in Yamatai in order to address the shrinking population. Efforts to improve bilateral ties with Yeongseon were also pursued. However, she refused to reduce the defence budget from the high level it had remained at since the 2010 Masukan War.

Under Yamamoto's leadership, Yamatai began to recover slightly from its recession in 2017. In 2018, the Yamamoto cabinet began to enact structural reforms to make it less difficult for foreign corporations to enter Yamataian markets, a move that was not expected by international analysts. An Office of Administrative Reform was also created to clear the Yamataian government processes of the notorious amount of red tape and begin moving governmental functions online. In a shocking move, various laws, particularly sexual assault laws, were modified in 2018 to utilise more gender-ambiguous wording to protect the rights of gender non-binary people in Yamatai.

Despite her seemingly progressive policies, Yamamoto has also been noted to hold right-wing nationalist views, and is believed to be an advocate for historical revisionism. She is also alleged to maintain close ties to the Yamataian military-industrial complex. Notably, certain "strategic industries" have been increasingly exempted from pro-competition legislation.

In January 2019, an informal poll showed that Yamamoto was one of the most popular Prime Ministers in recent Yamataian history. She is known for her skill at using social media such as Kimimono to connect with the people, and can also often carries out walkabouts in her constituency despite her busy schedule as Prime Minister. Yamamoto and the YRP won the 2019 general election with a landslide vote, a vast improvement over the 2015 election.

Yamamoto's father Okudera Yoshiaki served as the Minister of Education from 1982 to 1986; he is the son of Okudera Gunzo, the second Prime Minister of Yamatai and the first to be elected after Okabe Nariakira. Yamamoto's mother, Takaoka Mariko, is the sister of Takaoka Shinzo, the current owner of Takaoka Heavy Industries. Yamamoto's older brother, Okudera Haruki, is the president and CEO of Mitsuhishi Chemical Solutions, while her younger brother, Okudera Hiroto, is a restaurateur.

She married Yamamoto Saigo, a former television host, in 1996. The couple have two children, Yamamoto Haruki, and Yamamoto Toru.

Retrieved from "https://ordis.miraheze.org/w/index.php?title=Yamamoto_Hanako&oldid=16632"
Categories:
Cookies help us deliver our services. By using our services, you agree to our use of cookies.