The Tachi-class patrol ship is a class of light gunboats produced by Mishima Industrial and Spaceflight Corporation (MISC) in the New Greater Empire since 287.

Built in the Nagata Shipyards in orbit around Mishima, the Tachi-class is utilised by various Imperial authorities, including the Imperial Navy. The model is also sold to some non-government organisations, such as security corporations.

Light, compact and well-armed for its small size, the Tachi-class patrol ships are 46 metres long. Well-suited for inter-system patrol and escort duties, the Tachi-class is designed to easily negotiate deep-space, with limited inter-system FTL capabilities. The Tachi-class is equipped to be highly customisable and capable of multi-role operations. The primary mission of these ships is system patrol and interdiction surveillance, though they are also capable of missions such as surveillance, reconnaissance, and support of special operations forces. When operating with larger vessels, the Tachi-class is able to provide long-range escort and anti-fighter screening.

Designed from the onset as a patrol vessel, the Tachi-class are equipped with a powerful sensor suite far above its weight class, allowing the ships to detect and discover targets of opportunity in deep space. A robust communications package enables the small ships to communicate with home bases as they range on patrol routes, also allowing the ships to provide fleet networking and act as communications relays for fighters and drone swarms.

2 dorsal missile tubes act as the Tachi-class's medium-range weapons system, capable of launching a multitude of warheads in the standardised Imperial missile caliber. An internal magazine stores 20 missiles. Besides the missile tubes, the Tachi-class is also equipped with 6 40mm point-defence automatic cannons with overlapping fields of fire for all-round defence against missiles, fighters, and for close-range combat against similarly-sized vessels. Electronic countermeasures and decoys are also equipped on the Tachi-class for defence against missiles.

Like most MISC vessels, crew safety and comfort was a priority in the design of the Tachi-class, crucial in the long-range patrols the class was designed for, where the mental health of crews was taken into consideration due to the cramped size of the ship. Spacious crew quarters, a gym and limited recreation facilities, a state-of-the-art medical bay, and a large galley provide the 12-man crews of Tachi-class ships with enough space and amenities to comfortably live for long periods. Besides the crew of 12, the Tachi-class is also able to embark another 18 personnel comfortably for shorter periods, enabling the vessels to act as small-scale troop transports or special forces insertion vessels. It is known that the Imperial Navy has experimented with utilising Tachi-class ships equipped with experimental stealth technology to deploy Orbital Divers in deep-penetration missions behind enemy lines. 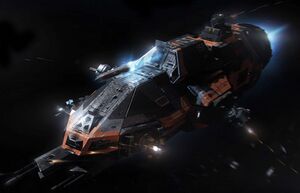 A Tachi-class patrol ship in combat

Designed by famous starship designer Yumiko Melpomene Wang for MISC, production of the Tachi-class began in 287. The ship quickly gained popularity amongst the frontier Space Rangers and the Orbital Guards. Shortly after, the Imperial Customs Authority also took notice of the design and sought to replace its entire fleet of Metsuke-class frigates with Tachi-class patrol ships. Though the older Metsuke-class was larger and equipped with more weapons, the ageing frigate that originated as an armed freighter design was unwieldy in the spacelane enforcement operations that the ICA carried out. From 292, the ICA began a plan to replace each Metsuke-class patrol vessel with a formation of two Tachi-class ships instead.

From 304 to 306, the Tachi-class attained some infamy when a single ship was stolen from the Imperial Navy by a small gang of criminals, who then proceeded to carry out a string of armed robberies using this ship. As of Ichigatsu 307, this "Tachi Gang" is still at large, but has seemingly gone underground.

Retrieved from "https://ordis.miraheze.org/w/index.php?title=Lian-class_patrol_ship&oldid=17023"
Categories:
Cookies help us deliver our services. By using our services, you agree to our use of cookies.