The Mi-45 is a medium-lift VTOL-capable aerospacecraft equipped with four vectoring-capable ion thrusters. It is deep space-capable with a pressurised cockpit, but is designed primarily for short-range orbital and in-atmosphere operations. The Mi-45 is intended to be used to transport cargo from orbital vessels to planetary surfaces and vice versa, as well as for in-atmosphere airlifting.

Two medium-duty cargo lifter arms flank the cockpit module, and are equipped with electromagnetic clamps as well as carbon nanotube-reinforced lifting cables. The Mi-45 is capable of carrying 100 tonnes of cargo between these arms, usually Imperial-standard Proclamation 233-compliant cargo containers. Pallets are used to carry Small-Type and Medium-Type containers, and the largest cargo containers that the Mi-45 can safely carry are the Standard Large-Type Cargo Containers. Besides cargo transportation, the Mi-45 is also designed for in-atmosphere tactical airlift operations, and is capable of airlifting most small-to-medium sized Imperial ground vehicles. Multiple Mi-45s can also work in tandem to carry larger vehicles, such as the Type-87 Kitagawa-class walker, providing the Imperial Army with flexible strategic mobility.

When landing, the Mi-45's lifter arms rotate upwards. This is to save space in hangar bays and landing fields. Mi-45s are fully armoured for battlefield protection, and feature layered composite titanium armour capable of deflecting ground fire during tactical airlift operations. Mi-45s are also equipped with countermeasures against enemy missiles and often fly with anti-laser polymer coating applied.

A crew of three operates the Mi-45, with a pilot and copilot to operate the craft and a loadmaster to manage cargo-lifting operations. Though the cockpit module is pressurised, like most Imperial pilots the crew don vacuum-rated suits to protect themselves in case of a hull breach while in space. 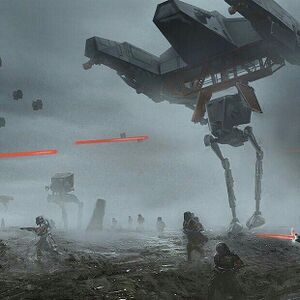 A depiction of a Mi-45 dropping off a Type-58 walker in combat.

Retrieved from "https://ordis.miraheze.org/w/index.php?title=Mitsuhishi_Mi-45&oldid=17339"
Categories:
Cookies help us deliver our services. By using our services, you agree to our use of cookies.