The Prime Minister heads the Great Council of State, and submits a list of ministers for appointment to the Chancellor.

The current officeholder is Nishioka Kyouka of the New Citizen's Group, who was appointed on 12 July 2019. 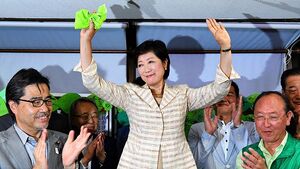 The prime minister is appointed by the chancellor, who is theoretically free to appoint anybody they wish to the post. However, as it is necessary for the prime minister to achieve a vote of confidence from the Heavenly Assembly prior to appointment, the office is almost always held by the leader of the party which obtained the most seats in the last general election, or a leader nominated by a coalition.

Upon their selection, the prime minister will propose to the Chancellor a list of ministers for the Great Council of State and, within twenty days, must submit a program outlining the new government's agenda to the assembly, requiring a vote of confidence from the its deputies. If the vote of confidence fails, the assembly will nominate a new prime minister, who must again submit a program outlining their agenda and recieve a vote of confidence. An absolute majority of votes in the presence of at least half of all assembly deputies is required to approve the formation of the government, which the chancellor will then accept and administer the oath of office. If the vote of confidence fails again, the process of nomination is handed directly to the chancellor, and if their nomination also fails to secure confidence, they are then obliged to dissolve the assembly and call for new elections.

It is possible for a chancellor to refuse the appointment of the prime minister outright, and call new elections, but this is typically both politically volatile and limited, as the deliberate obstruction of the formation of a government is explicitly outlawed in the Chiseian constitution. Consequently, it is possible and reasonably common for a chancellor and prime minister of different parties to hold office simultaneously. In the event of such cohabitation, it is typical for the prime minister to exert control over domestic matters and the legislative agenda, while the chancellor oversees matters such as foreign relations, defence and justice.

The prime minister serves as the chief representative of the Council of State and the government as a whole, and is responsible for delegating it's agendas, coordinating the work of ministers, ensuring the implementation of policy, and issueing regulations. They nominate all of it's members freely, though traditionally the ministers of war, foreign affairs, justice and ceremonies are considered Royal ministers, and chiefly answer (and are de facto appointed by) the Chancellor.

As the Prime Minister's power derives from the legislature, they, along with other ministers, must answer questions from representatives during each sitting of the Heavenly Assembly.

Most official acts of the Chancellery require the prime minister's countersignature in order to become valid. The prime minister thus acts as the gatekeeper to the chancellor in certain cases, while also accepting responsibility for the actions of the chancellor in the assembly. This heightens the legal standing of the Chiseian premiership. However, the Chancellor does not need the prime minister's signature for a range of acts, including the appointment of officials to the Three Commissions, appointing judges, accrediting diplomats or exercising pardons.

The prime minister reserves the right to appoint and dismiss the heads of the federal domestic security services, including the National Police Agency, the Royal Border Guard and the National Protection Agency, though not the Jōhōgumi or the Chiseian Peaceguard. In the event of public disorder, the prime minister can, upon a motion by the internal security minister and an official request from the government of an effected state, authorise special units of the National Security Agency to restore order. If such units prove ineffective, the prime minister is authorised to call upon the Chancellor to deploy the Royal Chiseian Armed Forces to bring law and order.

The role of Prime Minister was first established in 1825, under the Grand Law reforms that followed the Taihei revolution, and was based on the model of the revolutionary Hamada government that briefly ruled parts of Shirakawa and Kitahashi during the period. The first person to hold the office was Yamamoto Koko, elected in 1826. The power of the Prime Minister during this period was relatively limited, as they could be freely dismissed by the Chancellor, and were thus dependent on both the assembly and executive. With the fading relevance of the Kōshin democracy in the 1850s, the Prime Minister became almost entirely subservient to the Chancellery, and served mostly as a go-between it and the Assembly.

After the 1924 New Year Rebellion, both executive offices became effectively powerless, as civilian government was replaced by military rule. From 1925 until 1954, the Chairman of the Council of Elders simultaneously held the de-facto titles of prime minister and chancellor.

The restoration of civilian rule in 1954 brought with it a new constitution, which overhauled the position of the office and made it predominantly accountable to the Heavenly Assembly. The first post-war Prime Minister was Amaya Yasuhiro.

Retrieved from "https://ordis.miraheze.org/w/index.php?title=Prime_Minister_of_Chisei&oldid=15206"
Categories:
Cookies help us deliver our services. By using our services, you agree to our use of cookies.