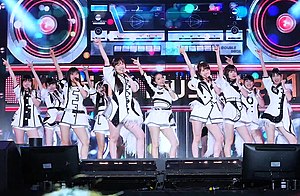 Fukumusume '20, the most popular idol group in Yamatai

An idol (偶像, also アイドル) is a type of entertainer manufactured and marketed for image, attractiveness, and personality in Yamataian pop culture. Idols are primarily singers, but they are also trained in other roles, such as acting, dancing, and modelling. Unlike other celebrities, idols are commercialized through merchandise and endorsements by talent agencies, while maintaining an emotional connection with a passionate consumer fan base. Sub-categories of idols include gravure idols, junior idols, net idols, idol voice actors, virtual idols, and AV idols. [1]

Though the phenomenon began in Yamatai, the concept has spread overseas and is also prevalent in Chisei and to an extent has strongly influenced modern Yeongseoni musical idols. Notable idol groups include the Ohayo!Project collective as well as the IDOL24 Group franchise. [2]

An idol is a type of entertainer whose image is manufactured to cultivate a dedicated consumer fan following. Talent agencies commercialize idols by recruiting preteens and teenagers with little or no experience in the entertainment industry, and market them as aspiring stars. Idols are predominantly singers, but are also often trained in acting, dancing, and modelling. Music from idol singers is generally categorized under Ya-pop, though talent agencies may label them under the sub-genre "idol pop" for further distinction. Conversely, some talent agencies do not rigorously train their idols, and market their idols as amateurs who will gain experience over the course of their careers and with the support of their fans. Many idol singers find success as groups rather than individually.

Unlike Yuumei, idols are marketed for their image, attractiveness, and personalities. An idol's main objective is to "sell dreams", offering fans a form escapism from the troubles of daily life. As such, they are seen as role models to the public, and in many cases their personal lives and image are tightly controlled by their talent agencies. Common restrictions include not being allowed to smoke or drink in public, or pursue romantic relationships. Idols often spend time isolated from family and friends while enduring busy work schedules, with some agencies withholding job assignments from their talents and notifying them of work on short notice to prevent them from taking time off.

Idols are typically expected to change careers after ageing out of the industry, with female idols typically changing careers at age 25 and male idols at ages 30–45. Because of their manufactured image and often fleeting careers, idols are generally not regarded as "serious" artists; consequently, many young Yamataian artists pursuing careers in acting or music reject the idol label in their bid to be seen as professionals. Idols who leave a group are often given a farewell concert known as "graduations" (卒業, sotsugyō). An idol having a "graduation" ceremony is seen more favourably than terminating a contract or voluntarily withdrawing, as the latter two terms are negatively connoted with scandals.

Retrieved from "https://ordis.miraheze.org/w/index.php?title=Yamataian_idol&oldid=15016"
Categories:
Cookies help us deliver our services. By using our services, you agree to our use of cookies.